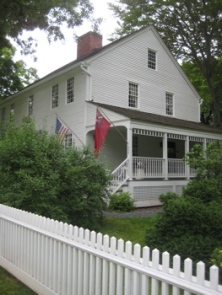 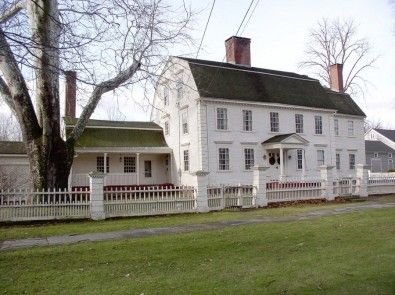 I am a senior at http://suffieldacademy.org and I am involved in a project-based learning class. Over the course of the winter term 2016 and the spring term 2017 the class main goal is to find out more about freedom, slavery, and the complexities in 1774. After the Boston Tea Party, the English Parliament drafted ”The Coercive Acts” in 1774. Many people throughout the thirteen colonies protested against these acts. For instance, in the town of Sheffield, Massachusetts, Colonel Ashley hosted citizens at his house. This group composed the Sheffield Resolves. Moreover, one of his slaves, Elizabeth Freeman, also known as Mum Bett, was inspired by this and later successfully sued for her freedom. Each student in the class is investigating different areas regarding this topic. For instance, some of my peers are looking into: slaves in Suffield during this time, the Boston Tea Party, an slave called, Old ”Ti”.

I want to find out more about Loyalists in Connecticut, but mainly in Suffield. I started to look into Connecticut first in order to get a better understanding and perspective of the bigger picture, before I went deeper into Suffield`s history. By using critical thinking skills I have been able to gatherer some background information about Loyalists in the period after “the Declaration of independence” was written. The document formally announced the colonies break from Great Britain. However, a number of colonists were against this and sided with Britain. These were known as Loyalists. I have researched many interesting things regarding the Loyalist in Connecticut. I learned that during the American Revolution they made up approximately 20% of the population in the colonies, and that 6% of the adult population in Connecticut were Loyalists. This is approximately 2000 – 2500 of the people in the state, which I regard as a quite high number. But did Suffield have any Loyalists? And if so, who were they?

After research on the internet and by using cross-referencing skills, I found out that there is a document named; “Revered Samuel Peter´s list” in the Kent Memorial Library in Suffield.  Allegedly there were at least four Loyalist in Suffield in 1774. Their names were: Alexander King, Captain Shem Burbank, Seth Austin and Isaac Pomeroy. Now my plan is to get access to documents and this way  to learn more about the document. First, I will go to the Kent Memorial Library to look at the “Revered Samuel Peter´s list” first hand, to check if this information is right. If so, I will use research skills to figure out some major question, like: who were these men? Why did they come to Suffield? How long had they lived in Suffield before 1774? What was their standing and position in the town? Why did they support Great Britain? And did they have families, wives, children, etc? Another thing I would like to do next is to get access to the book/document: “Connecticut’s Loyalists”. I believe this document will tell us more about why the Loyalists in Connecticut sided with Great Britain during the Revolutionary War. Furthermore, I have one more person I would like to research: “Hannah Barton”. I learned about her by doing extensive research on the internet. She is an interesting person, because she was born in Suffield in 1774 and was supposedly the daughter of Roger Barton, a Loyalist from New York. The fact that she was born in Suffield might suggest that Barton also was in Suffield in the late 1700s.  I have yet not find anything to support this statement, but I hope to find more about this in the time to come.

5 thoughts on “LOYALISTS IN SUFFIELD, CONNECTICUT IN THE LATE 1700s.”

This site uses Akismet to reduce spam. Learn how your comment data is processed.