In my last post, I wrote about how Patriots in Pomfret sent aid to the residents in Boston when they were being flooded by British soldiers. Many towns in CT wrote resolves against British influence and in support of the people of Boston when the British Parliament closed the Boston port. These resolves were made to show a whole town’s support against the British policies and forces.

On June 23, 1774, Pomfret declared its resolves, and the town adopted a resolution that they felt passionate about. This sentiment is expressed in the Resolves opening sentence: “The present situation of the American colonies … has become … of so serious 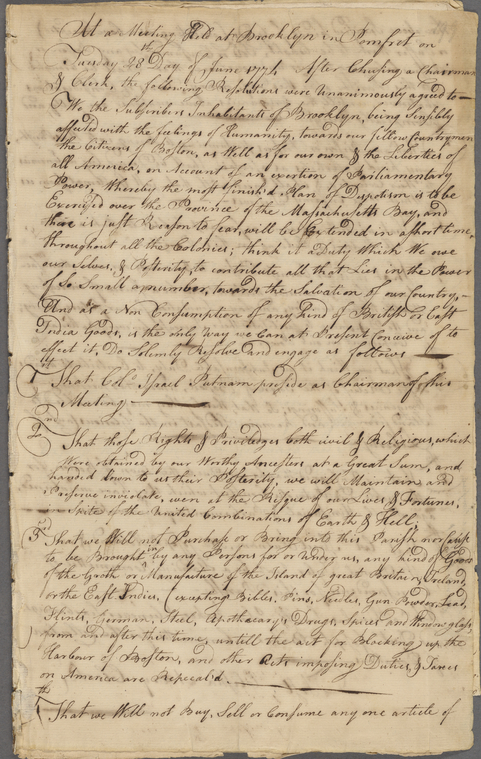 Page from the Pomfret Resolves

a nature that it calls aloud for the sentiments of every town and even every individual to be known and communicated.”

The key parts of the Resolves are “we therefore hereby assure our brethren that we will to the utmost of our abilities, contribute to the maintaining and supporting of our just rights and privileges, and to the removal of those evils already come upon us, and more particularly felt by the town of Boston.” The Resolves also declared that they would “encourage” “such a spirit of …  frugality among ourselves” that they would not have any need for British goods.  Furthermore,  “we do resolve, that every person who shall hereafter send for, and impact any British manufactures from Great Britain, or trade or deal with any who shall do so, until the loyal subjects of America are restored to, and can enjoy their just rights and privileges, shall be deemed and treated by us an ungrateful enemy to America.” What that means is anyone who deals or trades with the British will be considered an enemy; it was at that point that the citizens against the British considered themselves wholly patriotic.

After the Resolves were made, three people from Pomfret were chosen to be the messengers between the towns and to communicate with other Committees of Correspondence. These people were Ebenezer Williams, Thomas Williams, and Samuel Crafts. The Committees of Correspondence was a “provisional Patriot emergency government” first formed in November 1772 in Boston by the Patriots to support opposition to British policies. They were also the way of communication between Patriots in the 13 colonies.

What happened in 1774 in Pomfret, Connecticut?  Did the town side with the patriots or were there loyalist sympathies?  In my research, I discovered a discourse delivered on Thanksgiving Day in 1841 at the First Congregational Church of Pomfret by its minister, Reverend Daniel Hunt. This sermon has been recorded in a book form, and in this 40-page book, Rev. Hunt talks about the history of Pomfret. The book is a wealth of knowledge about who was in Pomfret at this time in the 1770s, and it firmly states that there were many patriots in Pomfret. In the sermon, Hunt mentions a letter sent to Pomfret from Boston. The letter thanks Pomfret for sending provisions to Boston when it was under siege by the British in 1774. It is interesting that this letter also describes the conditions in Boston.

This is the letter. “GENTLEMEN:—By the hand of Mr. Elias Wells we received your generous and kind benefaction for the poor of this distressed town. We cannot enough express our gratitude for this instance of your bounty, in which you have liberally contributed to the relief of many. What you have thus lent to the Lord, we trust and pray that he will pay you again. It gives us great consolation amidst our complicated and unparalleled sufferings, that our brethren in the other colonies show [sic] such christian [sic] sympathy and true benevolence towards us. That we are greatly distressed, needs no comment. Our harbor blockaded by a fleet of ships; our foreign trade actually annihilated; thousands of poor reduced to extreme want; troops continually pouring in upon us, to insult us in this our distress, is a consideration that must excite pity in the most obdurate. However, although we thus suffer, we are willing to suffer still more, rather than give up our birthright privileges. With great regard, we are your brethren and most humble servants.” JOHN SEELEY, TIMOTHY NEWELL, SAMUEL AUSTIN, JOHN PITTS.

The letter tells you that there were a lot of patriots in Pomfret since they agreed to send aid to the people of Boston, who were under siege by the British at the time. In the book, History of Windham County Connecticut by Ellen D. Larned, I found out that one hundred and five sheep were sent to Boston as a gift.

Hunt, Daniel. History of Pomfret: A Discourse Delivered on the Day of Annual Thanksgiving, In the First Church in Pomfret, November 19th, 1840. Hartford: J. Holbrook, Printer. 1841.