Mildred Wakefield was a resident of Connecticut who joined the signal corps. She was a graduate of Wellesley College class of 1913. While at Wellesley she learned about the Hello Girls through the school newspaper. Before joining the Hello Girls, she was an english teacher at East Hartford High School. She was 23 when she joined the Signal Corps, and that made her the youngest girl in the unit. To enter the Signal Corps she had to pass a rigorous examination which was impressive for her to do at such a young age. She then became a cadet in the signal corps. After the war she went back to teaching at East Hartford High School. It was very interesting to learn about someone that was so close to Suffield that was involved in this unit. Through this information we took the bare minimum that we knew and we tweeted out to Connecticut Historical Society and Wellesley College to see if they had any more information about Mildred Wakefield. To confirm our information before tweeting out to these organizations, we looked Mildred Wakefield up on Ancestry.com, which is a very valuable resource. Through Ancestry we found that her father was from Maine, which contradicted some other information that had said he was from Canada. Due to finding that all other family members matched up with our information, we concluded that due to people taking a census during this time, people might lie about some of their information to avoid any conflict with the government. This is why a lot of information from the census is not completely accurate. She was a very interesting person to learn more about considering we found so much information instantly on her through ancestry. I look forward to seeing what we find from Wellesley and Connecticut Historical Society. 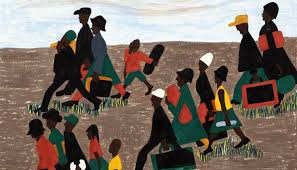 Artist Jacob Lawrence was inspired by the Great Migration and how it changed America. He showed the trek from rural south to urban North and West. This started during WWI. African-Americans were looking for job opportunities and thought they may have better luck in the north. Jim Crow Laws were causing major outbreaks in the south and people wanted to escape the violence that it caused throughout their society. This migration did not end until the 1970’s.

In 1903 the Wright brothers successfully flew a 21-foot flyer. After this they started creating them more to be used for attacking. The Europeans were the first to fly during World War I, but soon after, the Americans started to launch planes. The people that usually flew the planes were the students from the Ivy Leagues, because once they were drafted they were the ones that usually would be helping fix and manage the planes. For this it was easier for them to fly because they knew how to work the planes. There were more pilots killed in accidents than in combat.

Aviation is brought back to Suffield in World War I, because a student that attended the Suffield School, Bartlett T. Bent, after 3 years went to St. Louis, Missouri to study to become a Lieutenant of the Aviation section of the Signal Officers’ Reserve Corps. He was sent to Missouri after he was just one of 14 that passed a test in Boston to go to this school for aviation. After he left Suffield School after his junior year he went to work at the Traveler’s Agency. He worked there for eight years the went to fly in the Signal Officers’ Reserve Corps in St. Louis. Once he announced his departure from the Traveler’s Agency, he was presented with gifts and given a farewell party from his colleagues in the agency. From this we can see how excited they were to watch Bent move on to such great things. He would be training to fight for his country in World War I. Although we do not know a lot about Bartlett Bent’s life after he left for St. Louis, we know that he lived and that he went to train to fight for his country. We have not found any information on his life after moving to St. Louis.

You can be original by building off others ideas how does this apply to a project based learning class?

Adam Grant says at the end of his presentation, “Quick to start but slow to finish” as we continue to look at specific topics about the home front during WWI how does this effect our research on specific topics?

Why is creativity so important to a project based learning class?

Cavalry members standing with their horses.

The American cavalry was there to support the British and French, but the cavalry unit was less useful during World War I due to the advances in technology. The Cavalry unit mainly were involved in helping with transporting messages and materials, helping locating the enemy and strategizing, and finally any police duties involved with the military. Some cavalry units were dissolved and created into field artillery units. Having a cavalry unit was a major advantage in some ways compared to being on foot. This would reduce the amount of casualties due to the speed of being on a horse compared to being on foot. America only had one cavalry unit which was the 2nd U.S. Cavalry Regiment. The cavalry unit had a huge impact on the defensive of the strategies used. The U.S. Cavalry Unit was the only unit that received two firearms. After the attack, they decided on the regulations for the 2nd U.S. Cavalry Unit which included: Each troop would have six automatic rifles, they would have enough horses to carry the firearms, and fifty men in the troops would be given grenades. The 2nd Cavalry Unit had 14 officers and 302 troopers. The Cavalry, being the only one in the U.S. had unique roles and were given opportunities that were unique only to the cavalry.