Over the course of our school year, our class has had a deep connection with the town of Seicheprey in France. We first learned about Seicheprey through our research about Sergeant Stubby, the war dog of the 102nd US Infantry. After learning about Stubby’s heroic tales and service, we developed a curiosity to learn more about this significant battle for Connecticut history. Due to this battle being significantly historic for the Connecticut veterans specifically, the importance of this battle gradually faded in memory and history when the Connecticut veterans passed away in the 20th century. Our class discovered several interesting facts and stories from the Battle of Seicheprey, such as one of our Suffield veterans at the battle serving as a cook. When we learned of the details when the German storm troopers overwhelmed the trenches, we were shocked to learn that the cooks responded by picking up their knives and fighting off the Germans with hand-to-hand combat. Along with these facts we found new events that were happening in the town of Seicheprey today. We took the liberty to spread our findings across the social networks of our class blog and twitter. Our posts were immediately recognized by many WWI historians and eventually by Stéphanie Trouillard, a French journalist studying the history of WWI. 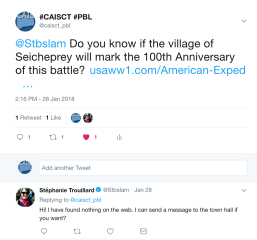 We reached out to Stephanie to find out if the town of Seicheprey was doing a commemoration for the 100th anniversary of the Battle of Seicheprey. She took the initiative to reach out to the town hall of Seicheprey and received a response from Gérard Andre, the Mayor of Seicheprey. From this information we discovered that Seicheprey was honoring this historic battle on April 21st, 2018 and intend to make a fountain with several representatives from Connecticut in order to honor the 102nd division and Sergeant Stubby. After this interaction from Stéphanie, we were able to continue communications with the Mayor and other citizens from Seicheprey as well as students from the nearby school of architecture. While we were not able to attend the commemoration, these architecture students shared their local history project with us. Then we shared slides from our presentation with them. It was great to get positive feedback from students doing the same type of work that we were doing here. 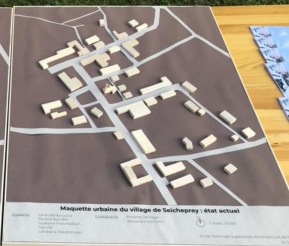 An interactive exhibit from the commemoration

Pauline, a student from Seicheprey reached out to us and gave us a very detailed overview of what the town presented and the different activities that were going on in the town to commemorate this battle. These connections to Seicheprey have been the foundation of our class and we are extremely thankful to everyone who has helped spread the story of this forgotten battle#LeastWeForget. 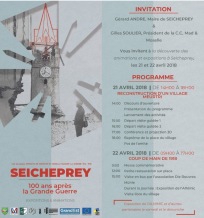 An invitation to the commemoration of April 21st.