Elizabeth Freeman born in 1742, to enslaved parents in Claverack, New York.  At only six months old she was purchased with her sister, by John Ashley of Sheffield, Massachusetts, where she served him until she was nearly forty years old. This woman broke the ground for the abolishment of slavery in the state of Massachusetts. It all started with a heated argument between her sister and the mistress of her slave house, Elizabeth intervened and stepped in front of a strike from a heated kitchen shovel. This led her to to call on to Theodore Sedgewick ,a Stockbridge lawyer to help her sue for her freedom. Brom & Bett v. Ashely was argued in front of a county court. The jury ruled in favor of Brom & Brett making them the first enslaved Africans to be freed under Massachusetts constitution of 1780.

Mum Bett was born a slave in 1742, and worked  in Colonel John Ashley’s house in Sheffield, Massachusetts. Ashley was a local leader, a merchant and very prominent in his community. He was also married to Hannah Ashley. Mum Bet was born a slave and was owned by the Ashley residence for 40 years. One day, Hannah Ashley struck and hit Bet in the face with a burning shovel. This badly scarred her face. After the incident, she decided she was going to use her natural rights, that “all men are born free and equal,” and fight for her freedom.

She later became the first African American slave to be free in the state of Massachusetts. She then went to Stockbridge to Theodore Sedgwick’s household. Sedgwick was an attorney and a lawyer, and agreed to help Mum Bett in her freedom suit fight. How did Mum Bet know that Theodore Sedgwick would help her though? After research, the answer has been found. Theodore Sedgwick used to live in Sheffield Massachusetts and knew John Ashley. They were both very prominent and wealthy in the community. Actually, Sedgwick often visited the Ashley home along with a group of men who put together the Sheffield Resolves. The Sheffield resolves, in short

“was a Colonial American petition against British tyranny and manifesto for individual rights, drawn up as a series of resolves approved by the Town of Sheffield, Massachusetts, on January 12, 1773 and printed in The Massachusetts Spy, Or, Thomas’s Boston Journal on February 18, 1773. It is said that the meeting took place in the Colonel John Ashley House” (Document 2). 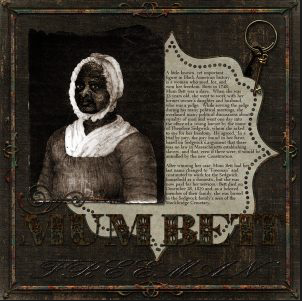 Sedgwick and Ashley sat together in the Ashley’s living room and agreed on a petition against their individual rights, yet Ashley still had multiple slaves working for his family. This is what most New England families stood for. They believed they should rebel against the British, and fight for their lives yet they were still enslaving other humans who should have also had those rights. Sedgwick believed in natural rights for African Americans, while Ashley did not. This may be because of his education and upbringing.

Sedgwick was born in West Hartford, Connecticut and was born into an immigrant ancestor family. He attended Yale College, where he studied law. Although he did not finish, he “read law” with Mark Hopkins. Mark Hopkins was an American educator and later went on to be the president of Williams College. Sedgwick was surrounded by liberal teachings. He understood the difficulty of being an immigrant because of his family. His relative, Robert Sedgwick actually came over on the “Truelove” boat in 1635. He studied at very liberal colleges and learned from liberal teachers, like Mark Hopkins.

Ashley, on the other hand, also attended Yale to study law but did not finish. Instead, he took a different path and settled for being a town merchant instead. He spent ten years in the military at first, and became very prominent in his town. He later became one of the town lawyers.

These two men had very different upbringings, making them different in many ways. This infers that is why they have different opinions about African American rights. Mum Bet was working during one of their meetings, and happened to overhear the part about natural rights. She knew Sedgwick and what he stood for, which is why she had the confidence to knock on his door that day.

After a successful court case and a mark in history, a friendship between Theodore and Mum Bett  bloomed. After Bett won her freedom she changed her name to Elizabeth Freeman and tried to start a new life. The problem was, trying to build a life as the only free African American women in Western Massachusetts became very challenging. In her words, trying to live in a racist world was close to impossible. Elizabeth decided to turn to Sedgwick for help again. Considering their wonderful friendship, Sedgwick hired Freeman to work for his family.

They built her a home on their property, so she could raise her daughter. Elizabeth worked for their family for the rest of her life. She died in Stockbridge December 28, 1829 and was buried in the Stockbridge cemetery. She actually was buried in the Sedgwick family’s part of the cemetery because they really did consider her one of their own.